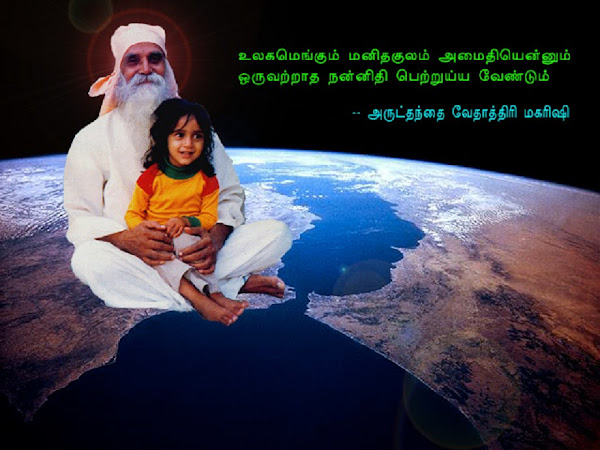 (With thanks to You Tube videos)🙏 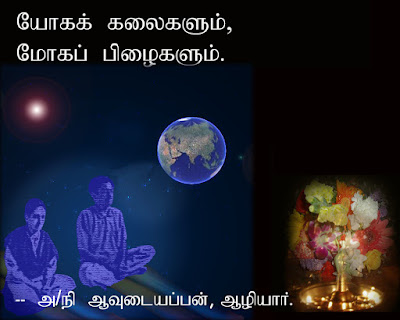 Go to the link, 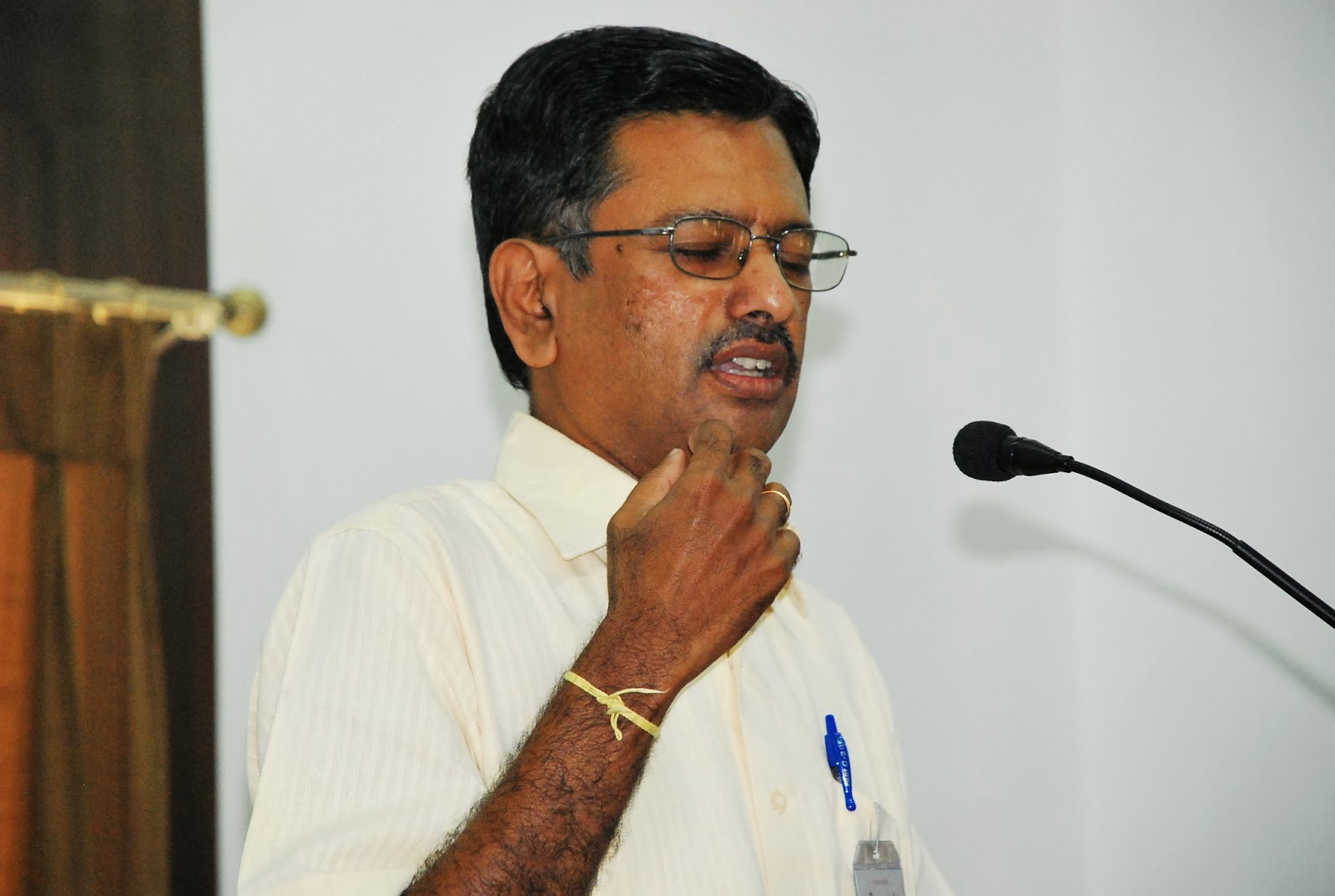 To view this please logon to http://mounamexperience.blogspot.in/ 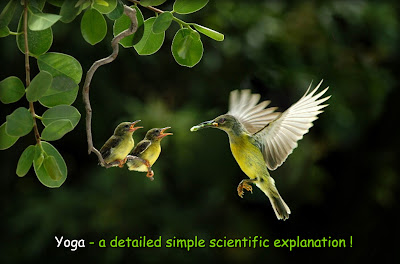 5. guruji and his organization

to know about my Guruji
Sithar Vethathiri MahaRishi
and his teachings
click the following link
http://www.vethathiri.edu.in/

6. the secret of pleasure 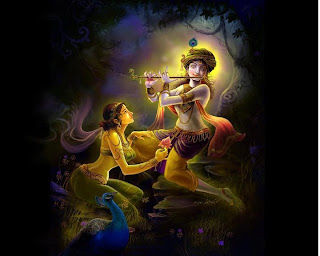 this kavithai in the language Tamil  reveals the truth
behind  the illusory physical pleasure.
to view this please logon to
http://www.kayachithu.blogspot.com/

7. you are not your mind

YOUR MIND IS YOUR REAL PROBLEM

The mind is a superb instrument if used rightly. Used wrongly, however, it becomes very destructive. To put it more accurately, it is not so much that you use your mind wrongly – you usually don’t use it all. It uses you. This is the disease. You believe that you are your mind. This is the delusion. The instrument has taken you over. Just as dogs love to chew bones, the mind loves to get its teeth into problems.


Your mind is an instrument, a tool. It is there to be used for a specific task, and when the task is completed, you lay it down. About 80 to 90% of most people’s thinking is not only repetitive and useless, but because of its dysfunctional and often negative nature, much of it is also harmful. Observe your mind and you will find this to be true. It causes a serious leakage of vital energy. This kind of compulsive thinking is actually an addiction.

You have probably come across “mad” people in the street incessantly talking or muttering to themselves. Well, that’s not much different from what you and all other “normal” people do, except that you don’t do it out loud. The involuntary thought processes, continuous monologues or dialogues comments, speculates, judges, compares, complains, likes, dislikes, and so on. It is not necessarily relevant to the situation you find yourself in at the time; it may be reviving the recent or distant past or rehearsing or imagining possible future situations. Here it often imagines things going wrong and negative outcomes; this is called worry. Sometimes this is accompanied by soundtrack, visual images or mental movies. Many people live with a tormentor in their head that continuously attacks and punishes them and drains them of vital energy. It is the cause of untold misery and unhappiness, as well as of disease…

When you listen to that voice, listen to it impartially. That is to say, do not judge. Do not judge or condemn what you hear, for doing so would mean that the same voice has come in again through the back door. You’ll soon realize: there is the voice, and here I am listening to it, watching it. This I am realization, this sense of your own presence, is not a thought. It arises from beyond the mind.

So when you listen to a thought, you are aware not only of the thought but also of yourself as the witness of the thought. A new dimension of consciousness has come in. As you listen to the thought, you feel a conscious presence – your deeper self – behind or underneath the thought, as it were. The thought then loses its power over you and quickly subsides, because you are no longer energizing the mind thought identification with it. This is the beginning of the end of involuntary and compulsive thinking.

When a thought subsides, you experience a discontinuity in the mental stream - a gap of “no-mind”. At first, the gaps will be short, a few seconds perhaps, but gradually they will become longer. When these gaps occur, you feel a certain stillness and peace inside you. This is the beginning of your natural state of felt oneness with Being, which is usually obscured by the mind. With practice, the sense of stillness and peace will deepen. In fact, there is no end to its depth. You will also feel a subtle emanation of joy arising from deep within: the joy of being...

You feel your own presence with such intensity and such joy that all thinking, all emotions, your physical body, as well as the whole external world become relatively insignificant in comparison to it….

Instead of watching the thinker you can do meditation to draw consciousness away from mind activity and create a gap of no-mind in which you are highly alert and aware but not thinking. Meditation leads to enlightenment. Enlightenment is not only the end of suffering and of continuous conflict within and without , but also the end of the dreadful enslavement to incessant thinking. What an incredible liberation this is!

This post mostly contains extracts from the book “The Power of Now” by Eckhart Tolle, the Enlightened Spiritual Teacher who now lives in British Columbia. For detailed and further steps towards Enlightenment please refer to that great book of one of  the present day Gnanis.

-- in the path of Guruji,
raviyolimathi...

EINSTEIN'S LETTER TO U.S.PRESIDENT ROOSVELT IN 1939.

“ In the course of the last four months it has been made probable – through the work of Joliot in France as well as Fermi and Szilard in America – that it may become possible to set up a nuclear chain reaction in a large mass of uranium, by which vast amounts of power and large quantities of new radium-like elements would be generated. Now it appears almost certain that this could be achieved in the immediate future. This new phenomenon would also lead to the construction of bombs, and it is conceivable – though much less certain – that extremely powerful bombs of a new type may thus be constructed.”

This led to the Manhattan Project and ultimately to the bombs that exploded over Hiroshima and Nagasaki in 1945.
(taken from the book “The Universe in a Nutshell” by Stephen Hawking, the present Scientist.)


ESSENCE OF THE DRAMA "ATOMIC POISON" OF VETHATHIRI MAHARISHI IN 1957.
No country should conduct nuclear tests. All existing atomic weapons should be handed over to the U.N. for dismantling without danger to anyone. His introduction to the drama ends as “I herewith humbly request the leaders of all nations and all my readers to give your sincere and heartfelt consideration to the question of survival of the future generations of mankind”.

The forward given by former Director of CBI, D.R.Kaarthikeyan to that book in 2002 details the terrible facts and will not allow us to sleep peacefully.

On Friday (April 3,2009), in Strasbourg, he was rapturously applauded by French and German students when he said he wanted to rid the world of nuclear weapons. In Prague on April 5, he spelled out his hopes, outlining a host of means to that end and denouncing fatalism in the face of the nuclear threat as a “deadly adversary.”

He said, “ the spread of nuclear knowhow and technology had to be stopped, since it would become increasingly easy to “buy, build or steal” a nuclear bomb. The risk of terrorists being able to obtain a nuclear device was “the most immediate and extreme threat to global security.”
(taken from “The Hindu” – April 07, 2009.)


Atlast, the 50 years before-forethought of our Swamiji reached the U.S.President. The above words reproduces our swamiji’s same words. It gives a ray of hope. The rapturous applause of students, the younger generation , shows that they are more brilliant than the world political leaders and scientists. This positive attitude in Obama has gifted him Nobal Prize now.

If the technology goes to the hands of terrorists that will be the end of human race in this planet earth as once dinosaurs were destroyed by nature itself. That will be the end result of the discovery of e = mc2 and the letter written in 1939 to Roosvelt. That is the difference between Scientists and Gnanis.

The tsunami that hit Japan on March 11, 2011 caused reactors in the atomic plants melt down and start emitting radiations in the surrounding earth, sea and atmosphere. Nuclear fission means when a neutron attacks uranium nucleus, the uranium nucleus splits into 2 other nuclei and also emits one or more neutrons, that emitted new neutrons attacking the other uranium nuclei and multiplying like this, thus producing a lot of energy and heat. Here water is the cooling moderator, and as happened in Japan, if the reactors are damaged by earthquake or tsunami, nobody can stop the melt down of nuclear reactors and spreading of dangerous radiation emissions on earth. It is like another nuclear bomb attack. It is a big caution to humanity to stop playing at sub-atomic level. Here nature itself reacts from reactors.

What we have in store for our next generation?. Nuclear threats, Global warming, pollution, decreasing availability of pure drinking water, Chemically fertilized grains & vegetables, adulterated food, terrorist attacks, enmity between each other in the name of religion, caste, race etc., the increasing number of broken marriages, increasing number of elders homes, corruption, misuses, selfishness etc. Media is also doing it’s best in polluting the minds by directly showing and indirectly sowing hatred and lust. TV serials are imparting violence inside family and relations.

On the other hand, nowadays, we can see a lot of yoga centers appearing here and there. People start realizing the need of the hour. This also gives a ray of hope. Only yogic minds like us can save the world that reflects the ever-increasing fragmentation of the mind. A coconut tree even if it stands in a sewage and drainage path will have pure water inside it’s coconut. Like wise the yogic mind will be pure in this insanely complex world of continuous problems and conflicts. That is the purpose of Gnanis coming to this earth now and then. That is the purpose for so much vethathiria seeds sown by our Guruji. What else than the following manthra that is being uttered daily by lakhs of meditating souls can save the world?

It is our duty to spread our Guruji’s teachings to as many people as possible to make it possible to handover this beautiful world in a peacefully livable condition to our future generations.

I present here a research paper that was presented by me at a seminar at NGM College, Pollachi. 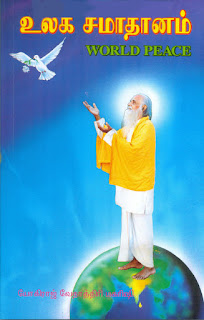